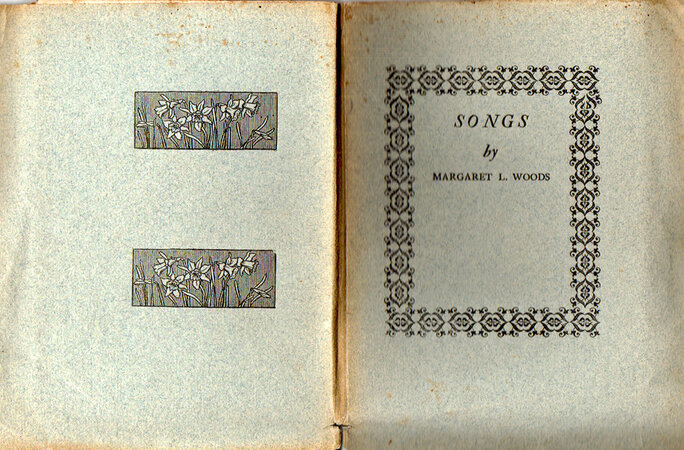 First edition. Different printer’s ornaments decorating the top of each page. One of 200 copies, this no. 5, all sold for the benefit of the Radcliffe Infirmary. 8vo., an extremely good copy in the original wrappers decorated with printer’s ornaments and engravings of daffodils on the back, yapp edges, slight darkening to the edges of the wrappers, small tear to the lower yapp edge, and some light foxing but still good in the original state, uncut.

Margaret Louisa Woods (1855-1945), known to her friends as Daisy, was the daughter of Granville Bradley, dean of Westminster and schoolmaster, and the wife of Henry Woods, who became President of Trinity College, Oxford and Master of the Temple. She was also a longstanding friend of the printer, Henry Daniel who published two of her works, Lyrics (1888) and Songs which we have here. A poem of hers also appeared in the very rare Daniel Press publication, Garland for Rachel (1881). Woods later had a distinguished career as a novelist and nonfiction writer.