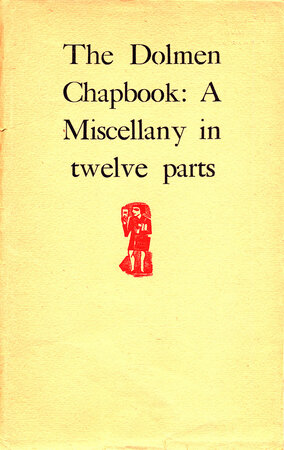 < >
One of very few complete sets

Twelve parts in the extremely rare original loose folded wrapper with an illustration by Eric Patton in red on the cover and titling in black, our folder is rather torn up the spine but still connected. One of very few complete sets. With the barely noticeable blindstamp of the Library of T.M. Ramsay on the folder.

It is very rare to see all 12 chapbooks together, some issues being extremely rare and most being published in editions of only 250. The idea behind them was to reprint short texts with illustrations using various type formats and techniques within a uniform page size. Gibbings wrote expressing an interest in the work and sent his County Cork fable The Perfect Wife which was printed with his wood engravings. Miller writes: “The series gives a fair picture of the very personal interests which informed the Press at this time”. Several of the chapbooks were issued later in special forms.
The titles are as follows:
1. The Ballad of Jane Shore by Donagh Mac Donagh. Handcoloured cut by Eric Patton. In Polyphilus type. Nov. 1954.
2. A Wexford Carol. With a handcoloured design by Leslie MacWeeney. In Polyphilus type. Dec. 1954.
3. The Perfect Wife by Robert Gibbings with wood engravings by the author. 240 ordinary copies. June 1955.
4. Thirty Three Triads by Thomas Kinsella, decorated by Pauline Bewick. In Caslon type. August 1955.
5. Death of a Queen by Thomas Kinsella, drawings by Bridget Swinton. In Poliphilus type. April 1956.
6. The Mines of Siberiay by Arland Ussher, designs by Nelson Paine. In Caslon type. May 1956.
7. The Loves of Bregog and Mulla by Edmund Spenser, handcoloured monotypes by Leslie MacWeeney. In Poliphilus type. Sept. 1956.
8. O’Reilly by Richard Weber, typographic decorations by Liam Miller. In Caslon type. June 1957
9. Irish Elegies by Padraic Colum, deivce by Liam Miller, In Poliphilus type. October 1958
10. Angel Songs, translated by Rhoda Coghill from Rilke, decorations after woodcuts by Albrecht Durer. In Hammer Uncial type. December 1958.
11. A Gaelic Alphabet by Michael Biggs with a note on Irish lettering by Liam Miller. In Perpetua type. March 1960.
12. Moralities by Thomas Kinsella, designs after Durer. In Janson type. Only 175 copies, March 1960.