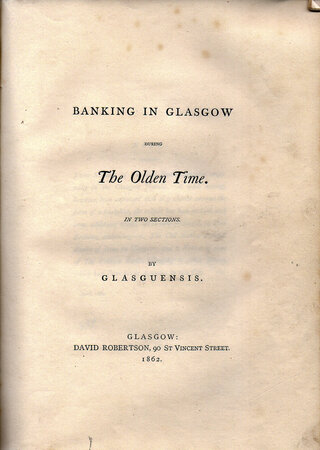 GLASGUENSIS [John Buchanan]. ~ Banking in Glasgow during The Olden Time.

These sketches of the Old Banks appeared first in the Glasgow Herald. This is an expanded version and forms a fascinating survey of banking in Glasgow up to 1862. The style of writing is at times partisan, the Edinburgh banks are arrogant and jealous of the new found success of the Glasgow banks of the eighteenth century. It also forms an useful guide to the players in Scottish free banking and entertaining with lists of Glasgow banks and banks with branches in Glasgow and details on what happened when banks failed.
An interesting provenance as it has an 1891 presentation slip from Mr. Elder at the University publishers James Maclehose to Sir David McCowan, whose booklabel is at the front. McCowan, a noted marine insurance man from Ayr, was made a baronet for his philanthropy in 1928.
Interestingly there is also an ownrership signature of A. Jardine on the first blank who would appear to be the first owner.