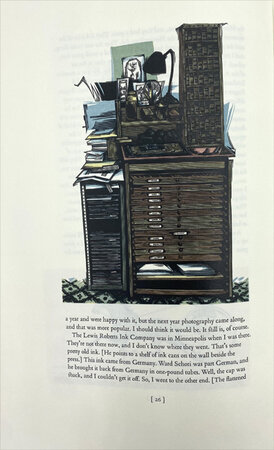 Emerson Wulling was a printer in La Crosse Wisconsin who was 92 when he met Gaylord Schanilec - this is his story. The text takes the form of two interviews by Schanilec and his friend and bookseller and bibliophile Robert Rulon-Miller with Emerson Wulling in 1995 and 1999. Wulling started printing in 1916 and kept going for 87 years...probably longer than any other printer.
With a checklist by Rulon-Miller of Wulling’s books, broadsides, pamphlets and ephemera printed over 60 years at his Sumac Press.