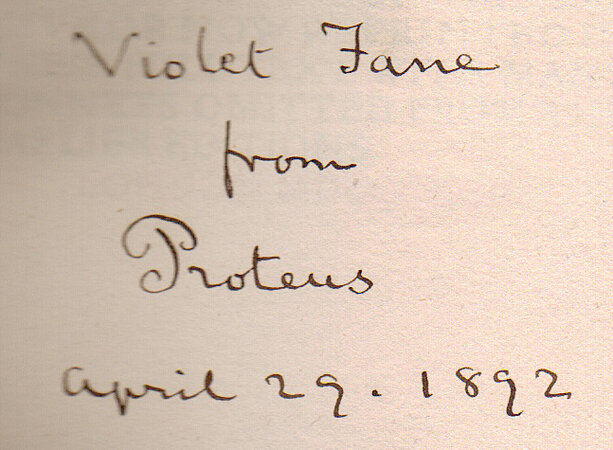 One of only 300 copies on Flower paper. Printed in red and black in Golden type, two woodcut borders, each poem opening with a woodcut initial by Hooper after Morris, woodcut press device after Morris on the colophon leaf. Small 4to. bound in the original vellum (by J. &. J. Leighton) with yapp edges, spine lettered in gilt, plain endleaves, uncut edges. Contained within a new full green goatskin drop-over box, lined with suede, the front cover blocked in gilt with the Kelmscott device, incorporating red and white onlaid flowers, the spine divided into six panels, lettered in the second, third and at the foot. Ties detached, retaining three, lightly maked and slightly bowed, otherwise good.

Presentation copy from Blunt to his erstwhile lover "Violet Fane", the subject of sonnet LV, "St. Valentine's Day". It is inscribed in ink on the front fly-leaf "Violet Fane from Proteus April 29. 1892".
The writer Mary Singleton (1843-1905) achieved a succès de scandale with her collection of poetry From Dawn to Noon, published in 1872 under the pseudonym "Violet Fane". She swiftly established herself in London literary and artistic society, counting Wilde, Robert Browning, Swinburne, and Whistler amongst her circle. In the early 1870s she had a very public affair with Blunt's cousin, the diplomat Philip Currie, whom she married after the death of her husband in 1893, and in 1880 she began a relationship with Blunt himself.
"Her combination of wit and emotion sparked off in Wilfrid a new electric storm of poetry" (E. Longford, A Pilgrimage of Passion, p.161), producing sonnet LV, "St. Valentine's Day", which uses the metaphor of a hunt, ending: "I seem to see and follow still your face. / Your face my quarry was. For it I rode / My horse a thing of wings, myself a god").
The relationship between Blunt and Singleton did not last for long, but he kept in his papers a bunch of everlasting flowers tied with a crimson ribbon given by her and the two remained friends. This copy was inscribed to her shortly after his return from Egypt (where he had been since the beginning of the year), and is one of the earliest copies to be inscribed: the only earlier copies that can be traced are those inscribed to Frederick Locker-Lampson (22 April 1892) and Jane Morris (received by her on 26 April 1892).