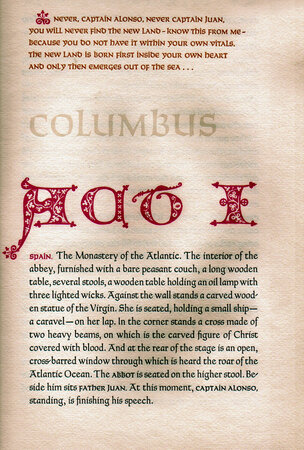 One of 140 copies. With decorative letters printed in red at the beginning of each of the Acts taken from an Italian book of 1475. Printed in red, ochre and black and with grey lettering running across the head of every single page. The type faces used are Goudy Thirty and Solemnis on Wookey Hole handmade paper. Folio, unsewn as issued in yellow handmade paper wrappers with red lettering, housed in the original blue cloth covered box with a yellow printed label on the upper cover. Spine of box a little faded, otherwise extremely good.

Nikos Kazantzakis was the greatest Greek writer of the 20th Century. He died in 1957 and Christopher Columbus was one of several plays published posthumously by his widow. This 1969 English translation works very well. The Allens suggest that the whole philosophy of Kazantzakis is revealed in a remark Columbus makes to Queen Isabella: 'Let him exist, my Queen, who preserves the dreams of night by day, and struggles to put them into action! This is what Youth means; this is the meaning of Faith. Only in this way can the world grow!'.
Original prospectus inserted loose. Booklabel of Clarence B. Hanson.