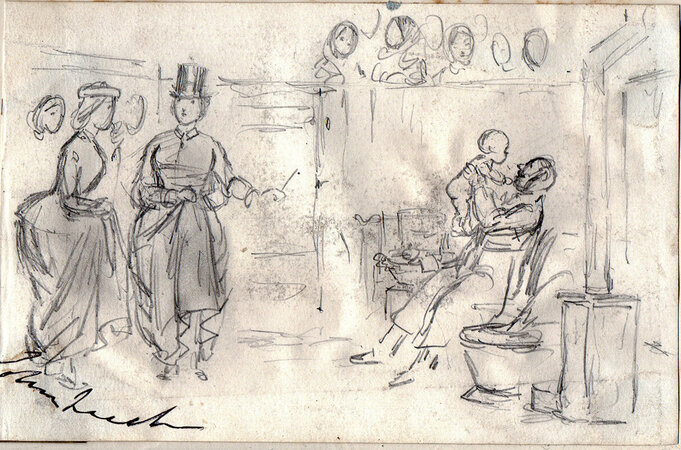 With 2 original pencil drawings by John Leech, one signed, given to Castle Leslie by Mrs. Leech in 1866

New edition. Folding steel-engraved frontispiece 'The Claddagh' and 37 illustrations by John Leech. 8vo., original green cloth lettered and decorated in gilt, some browning and alittle rubbing to extremities, but generally a good copy.

With two original pencil drawings by John Leech pasted in, one of a cartoon man on a horse with another horse on the same sheet and the second, signed in ink, of a fireside scene.
There is a manuscript note tipped in stating that the drawings were given to Castle Leslie in Ireland by Mrs. Leech in 1866, presumably sketches which weren't included in the final book.
There is an ownership inscription dated 1892 as well as a later one "Shane Leslie, bought for Glaslough 1949" Glaslough House is the Leslie family seat just on the border in Ireland. Presumably this is when the sketches were pasted in.
Purchased from the Leslie family.