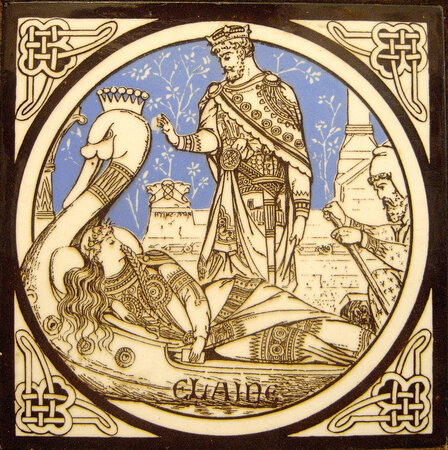 Six tiles from 12 designed for Minton, inspired by Alfred, Lord Tennyson's 'Idylls of the King'. Designed by Moyr Smith and first produced in 1876. Here unusually in blue and white. A fine group in remarkably good condition and framed for display in the 1960s by the Marshall Field department store in Chicago.

Tennyson’s The Idylls of the King poems are all about the legends of King Arthur so are a perfect subject matter for this most Victorian of designers. They are some of the best and were among the more popular of Moyr Smith’s pictorial series of tiles for Minton. A stunning display.
The tiles in this set are Vivien, Excalibur, Elaine, Isolt, Enid & Pelleas.