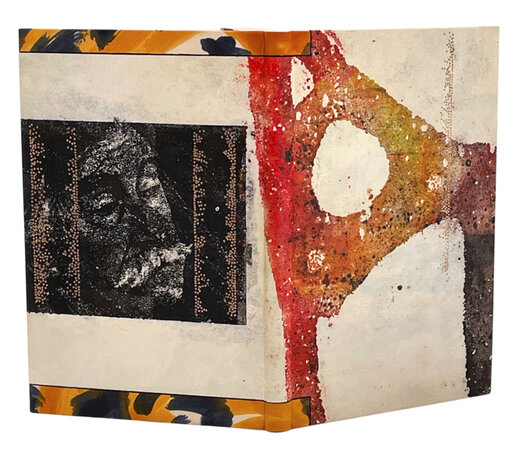 1 of 50 copies for the Designer Bookbinders of a total edition of 360 copies. Linocut illustrations by Sir Kyffin Williams. Printed in Monotype Bembo on mould-made paper. Large 8vo., bound by Mark Cockram in 2007 in a hand-dyed full leather binding with hand-printed vellum with gilt tooling, hand-printed vellum endpapers and suede turn-ins with gilt tooling. Housed in the original grey cloth velvet lined box.

Mark Cockram is a renowned British artist and binder who works on Artists’ Books, Book Arts and Private Press Books. He executes fine design bindings but also prints and illustrates his own works. His practice focuses on exploring the sculptural nature of the book, different formats and use of materials.
Cockram opened his first studio in Lincoln in 1992 and established ‘Studio Five’ in London in 2003. Has exhibited nationally and internationally since 1991, with work being represented in public and private collections in the UK, USA, Japan, Europe and Africa.
He is hugely respected and was elected Fellow of Designer Bookbinders in 2001, and is a member of The Society of Bookbinders and The Tokyo Bookbinding Club. He teaches and lectures extensively in the UK, Europe, Japan and the USA.