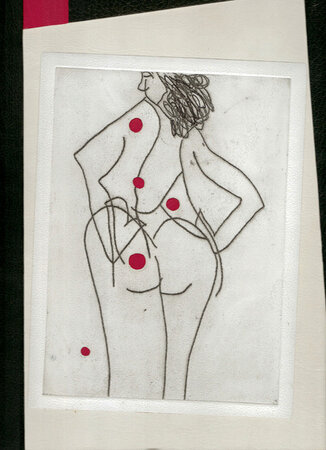 < >
One of only 28 copies, bound, illustrated, designed and printed by Susan Allix

No. 11 of 28 copies. 35 prints accompanying the hand-set text by Susan Allix, created from original portrait drawings and sketches. The etchings and other intaglio processes are combined with linocuts. The wire heads were made as sculptures and then photographed. Printed in blue, brown, green, purple and black in Bell, 18 pt. Roman and Italic, on mould made Somerset. 28 x 35 cms, bound by Susan Allix in full black and red goatskin and cream calf with beautifully spaced 'random' red lettering spelling Myth many times on the spine, on the upper cover is a white goatskin panel positioned at an angle with a print of a nude on it. Housed in the original red cloth box with morocco labels on spine and upper cover.

An extraordinary piece of work for which Susan Allix won the Judge's Choice award at the Oxford Fine Press Fair in 2012.
The artist combines accounts of Greek Myths with an interpretative series of portraits of people who characterise and might inhabit the stories. The book is divided into 5 themed chapters: Creating the World; War and Punishment; Sea, Sky and Underworld; Desire and Personalities in which Allix often focuses on lesser known myths. As always with Allix’s artist’s books, she uses everything to convey her ideas - words, prints, typography, structure and binding.