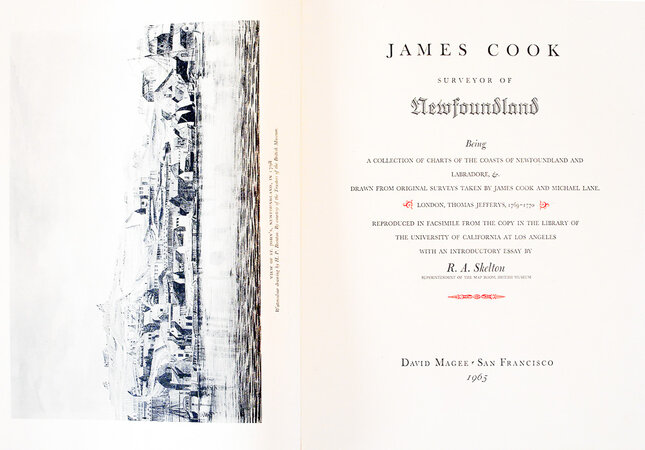 GRABHORN PRESS. COOK, James. SKELTON, R.A. ~ James Cook, Surveyor of Newfoundland, being a collection of charts of the coasts of Newfoundland and Labradore, &. Drawn from original surveys taken by james Cook and Michael Lane.

One of 365 copies. Facsimile of the first edition of 1769-1770 published in London by Thomas Jefferys. 6 pages of plates in the text volume plus facsimiles of the title page and 10 charts, mostly folding, in the separate volume of charts. Printed in black and red. Folio, both parts in blue printed wrappers, housed in a linen covered clamshell box with black and gilt label on the spine. Occasional light browning to the box, otherwise extremely good.

The facsimiles are taken from the copy of the first edition in UCLA library and the text is by R.A. Skelton, the superintendent of the British Museum Map Room.
Booklabel of Clarence B. Hanson, Jr.