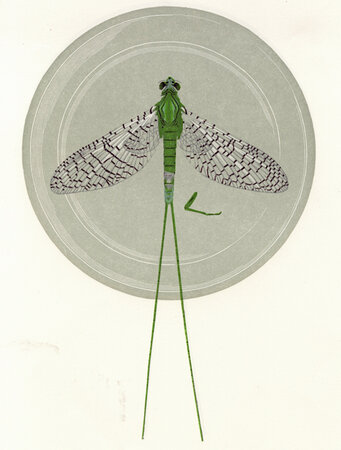 An, as yet, unclassified mayfly, perhaps Stenonema or Heptagenia, as Schanilec notes” “keying of these specimens to family proceeds well because it is based on wing characteristics. Being females means they are impossible to key accurately to genus.” Also, “Two species could be eliminated from consideration, based on known ranges.... but this still leaves several species possible”.
“’Dry Fly Entomology’ by Frederic M. Halford, published in London in 1897, was the inspiration for ‘Mayflies of the Driftless Region’. Halford, the Victorian innovator and popularizer of modern fly-fishing, scientifically described and surveyed the principal British mayflies of his time, but he did not claim his work as a comprehensive entomological treatise. Instead, ‘Dry Fly Entomology’ was aimed at providing anglers with a basic, working understanding of the nature of aquatic insects. ‘Mayflies of the Driftless Region’ can make no such claim: it is not a field guide. Instead, it is a study of mayflies by an artist....
I have created 13 depictions of mayflies, color wood engravings with each hue printed from a separate block of end-grain maple. These images are the result of careful microscopic study of specimens collected from streams near my home in rural Wisconsin” (Schanilec).