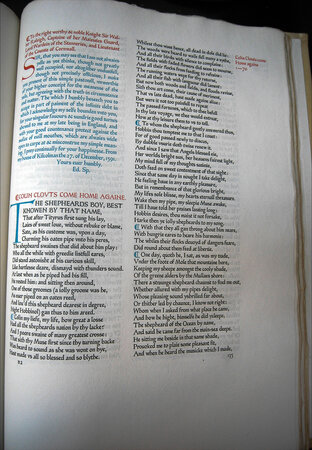 One of 200 copies on Batchelor 'knight in armour' paper, there were also 15 copies printed on vellum. Printed spectacularly in double column in red, blue and black in Subiaco type with large initials printed in red and blue designed by Graily Hewitt. The Greek type which appears occasionally designed by Selwyn Image for Macmillan. Folio, original brown cowhide backed ivory vellum sides bound in the WH Smith bindery with their monogram on the lower turn-in, gilt lettering on spine. Spine rather darkened and stained.

The paper for these volumes is larger in size than any used before at the Press and in the Bibliography Hornby begs any future binders to leave it alone and not trim it down thus spoiling his carefully designed proportions of the margins. The Minor Poems was the last of the Ashendene Press Folios printed in Subiaco type and it was a stupendous swansong with the superb balance of the lines of poems in two columns and with the fine colour printing and large initials.