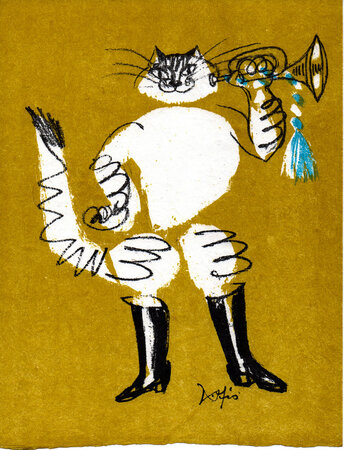 < >
One of only 35 copies with an extra suite of lithographs

No.2 of 35 copies on Japon nacré. with extra suites of the illustrations in various states (of a total edition of 270 copies), signed by Pierre Gonin. Colour lithographs by Hans Fischer, the latter printed at Arts Graphiques J.-E Wolfensberger in Zurich. Printed in Baskerville type. 4to., loose as issued in blue handmade paper wrappers, in the original vellum backed patterned paper covered chemise and vellum-edges patterned paper covered clipcase. An extremely good copy.

A French edition of the Fischer-illustrated German edition of Charles Perrault’s Puss in Boots which appeared in 1957. This French edition was published 2 years after the death of the artist.
Hans Fischer (1909-1958) was a Swiss artist, particularly admired for his work as an illustrator and author of children’s books.