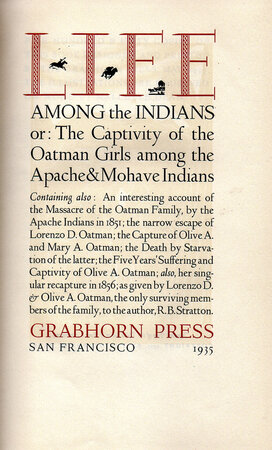 Inscribed by the artist

GRABHORN PRESS. STRATTON, R.B. DEAN, Mallette. ~ Life Among the Indians or: The Captivity of the Oatman Girls among the Apache & Mohave Indians. Containing also: An interesting account of the Massacre of the Oatman Family by the Apache Indians in 1851; the narrow escape of Lorenzo D. Oatman; the Capture Olive A. and Mary A. Oatman; the Death by Starvation of the latter; the Five Years’ Suffering and Captivity of Olive A. Oatman; also, her singular recapture in 1856; as given by Lorenzo D. and Olive A. Oatman..

Inscribed by Mallette Dean to his friend: “ To Jim and Yoland who are never too busy to listen and help. With love - Christmas 1970, Mallette Dean ‘Deano’.