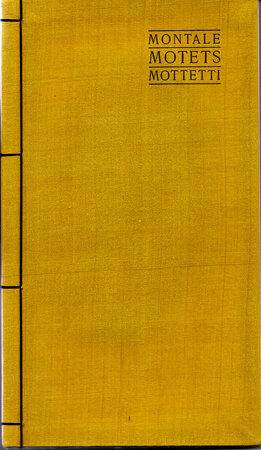 One of 300 copies signed by the author and translator. Printed in orange and black in French Elzevir type on English mould made paper. Pp.64. Tall thin 8vo., printed and bound in the Oriental fashion with limp yellow sides sides. A very good copy with the prospectus inserted loose.

These 21 poems were composed by Montale during 1933-39 and were addressed to a woman who had fled Italy to escape political and religious persecution. These poems bewildered some critics at the time and he was accused of being deliberately obscure. Montale answered these charges passionately in his essay ‘Two Jackals on a Leash’ which is appended to this book.