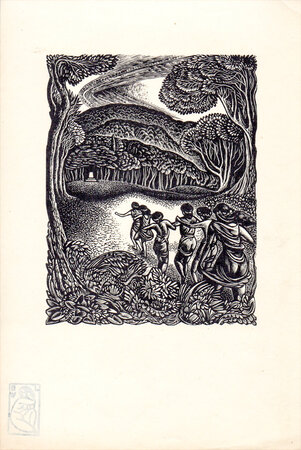 Engraving on p.9 for Endymion, by John Keats which was published by the Golden Cockerel Press in 1947. The book contained no less than 58 wood engravings by JBW which he worked on from 1944 until 1947. It was published in a total edition of 500 copies.

“All suddenly, with joyful cries, there sped/A troop of little children garlanded: Who, gathering round the altar seem’d to pry Earnestly round...”
Provenance: From the artist’s daughter.