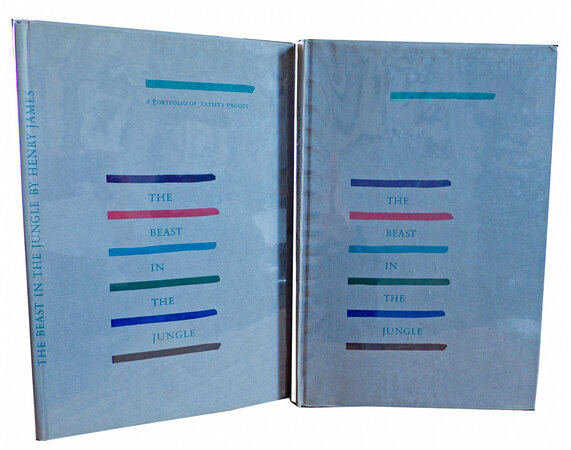 A Psychological Novel by Henry James. One of only 15 copies with an extra suite of 16 artist’s proofs each titled, numbered 9/15 and signed by the artist in a separate portfolio. 16 wood engravings by Blair Hughes-Stanton, all printed in two colours plus one illustration in grey, green, purple, red, blue, olive, blue/green and brown. Text printed in several colours in Romanée types on Arches paper. Folio, original handmade Italian printed paper covered boards with lettering and blocks of all the seven colours used in the printing on the upper cover, spine lettered in green, in the original acetate jacket, plus matching portfolio of the same patterned Italian paper covered boards also in the original acetate jacket. Very mild chipping to the top of the portfolio spine otherwise a very good set.

A total of seven colours are used for the 16 outstanding engravings by Hughes-Stanton, and these colours are also used to print the text, being inspired by the seven sections of the book each with a different emotional theme.
Whilst illustrating this book Hughes-Stanton was driven by the text and the emotional problems confronting the principal characters: "I feel him blocked by squares or screens, and dominated by his shadow; she is fluid, and her shape is the egg; the Beast lurks in the eye (or ego); and in the second block the line entangles him, or sometimes holds them together; but eventually they break".

This shorter story by James is one of his greatest. Clifton Fadiman wrote: "For me this is the best of James's shorter fictions, combining the utmost concentration of effect with the utmost inclusiveness of meaning".
This special copy with the portfolio is astonishingly rare.