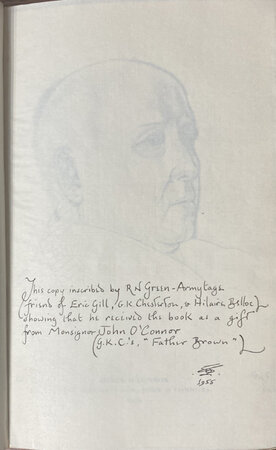 < >
Inscribed by G.K Chesterton’s ‘Father Brown’, with a tipped-in copy of his portrati by Gill

42 religious verses by Faith Ashford who wrote other things published by the Press - Christ, Things Unseen and Poor Man’s Pence.
Inscribed by “Father Brown” ie Monsignor John O’Connor, to R. N. Green-Armytage, a friend of Eric Gill, G.K. Chesterton & Hilaire Belloc. Tipped in is a later print of a portrait by Gill of Father John O’Connor, on whom G.K. Chesterton based his Father Brown stories.O’Connor was a mentor and confessor to Gill and Pepler as he was to Chesterton.
With the booklabel of the collector Stanley Scott who has added a note about the presentation and who possibly added the portrait.