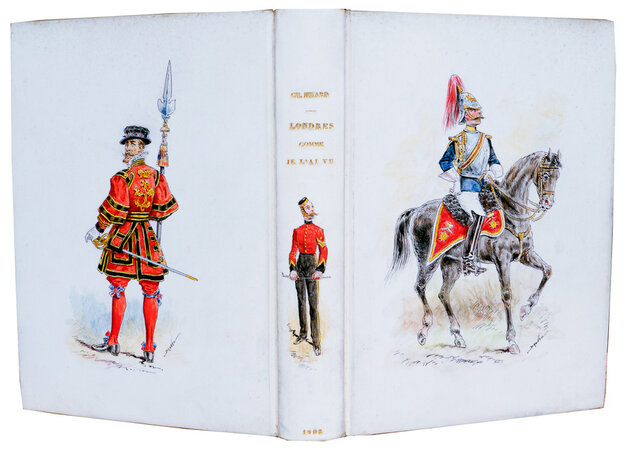 < >
With a unique painted binding by the famous Belgian caricaturist Draner

One of 100 de luxe copies on japon, this one unnumbere. 156 illustrations of London by Charles Huard. 8vo., in an unique original vellum binding by Carayon with an original painting by Draner of a Life Guard and a Beefeater on each cover and one of an officer on the spine, spine lettered in gilt, in the original marbled paper stiff wrapper lettered in gilt and slipcase, original wrappers bound in. A very handsome book and binding.

Draner who did the three painting on the binding was an important Belgian painter, illustrator and cartoonist. His real name was Jules Jean George Renard (1833-1926) and Draner was an anagram of his surname. He moved from Belgium to France in 1861 and became known at this time for his caricatures of military life, as on this binding which depicts a Lifeguard, a Beefeater and an army officer all with improbable whiskers, arrogance and spectacular ‘English’ noses. His military caricatures can be seen in several published albums including Types Militaires de Toutes Les Nations and Nouvelle vie militaire. He worked on many magazines and designed costumes for theatres and opera houses.
Charles Huard (1874-1965) was a French painter and illustrator very well known for his illustrations to Balzac. His London book was the third voyage book he was commissioned to do, the others were on Berlin and New York.