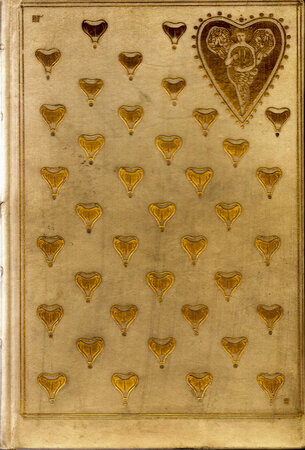 One of 100 special copies on japanese vellum. 5 illustrations by Charles Ricketts plus a reproduction of the bookplate by William Bell Scott for the author. Pp. xiv, 213. 8vo., original full vellum elaborately decorated in gilt to a design by Charles Ricketts with his monogram in gilt. Very mild bowing to the boards as usual, a few small marks but generally a very good copy.

With the bookplates of Sir John Leslie of Glasnough Castle and his son Shane Leslie who has added an ink inscription “Shane Leslie, in Limerick, Jan 1946”. Shane Leslie, cousin of Winston Churchill and from an important Anglo-Irish family, was a prolific writer and great advocate of Irish Home Rule.
Lord De Tabley (1835-1895) was a very distinguished bibliophile, numismatist and botanist who achieved recognition with this collection of poems. Drinkwater wrote of him, after placing him in the second rank of poetry, “of the essential elements of poetry there is scarcely one which which he was not richly, very richly endowed..he perceived the world clearly and intensely as a poet...he had a great sense of diction and an almost phenomenal vocabulary, and his poetic temper was nobly sensitive to all thrilling and poignant beauty. And yet, for all his splendid qualities, his is not among the great names..never was there more exasperating genius”.