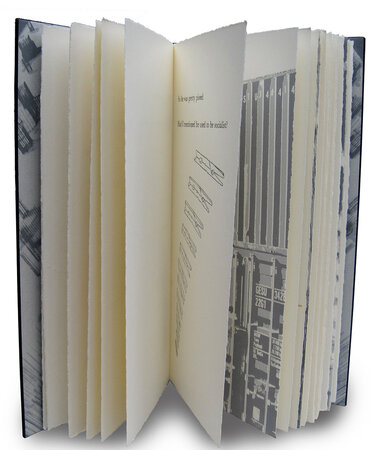 “The prose by Flynn involves a sad battle of wits and the humorous missed communications between a man and a woman. Illustration of the urban landscape with cranes, office buildings, construction sites implies this couple’s life will carry on for some time but will be taken over by some new lives by the end”. Funazaki reflects the text beautifully in here illustrations and binding design.
Eri Funazaki studied Graphic Design at Joshibi University, Tokyo, Japan and then worked as a graphic designer for Les Mains? Publications, Japan. In 2000 Eri graduated from the London College of Printing with a BA in Book Arts and Crafts, and was elected Fellow of Designer Bookbinders in 2007.
She has been awarded several bookbinding prizes including the Mansfield Medal in 2002 and currently works as a designer and fine bookbinder at Shepherds Bookbinders, London. Her work is in various private collections in the UK and abroad including The British Library.
Eri makes superb finely bound artists’ books with her artistic partner and writer Danny Flynn. This collaboration began almost immediately after her graduation and they have since produced twelve works in a series involving letterpress, screen-printing, linocut-printing, and fine design bindings using various alternative book structures. Their book works have been exhibited in The Royal Academy Summer Show in 2014, and are among the collection of the Crafts Council.