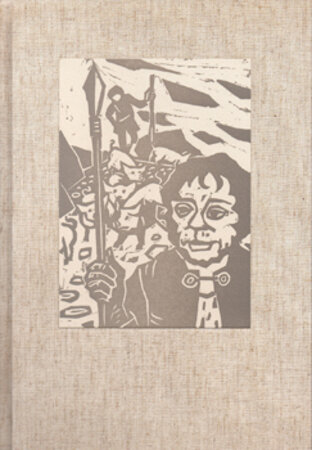 < >
Designed and illustrated with 8 original linocuts by Kyffin Williams

No. 274 of 350 copies signed by the artist. 8 linocuts by Kyffin Williams. Designed by Kyffin Williams and printed in Baskerville on Velin Arches mould-made paper. Tall thin 4to., original linen covered boards with linocut pasted onto the upper cover. A very good, bright copy.

Pryderi is the only character to appear in all four stories known as The Four Branches of the Mabinogi - which is The great work of Welsh medieval literature.
The text here, based on the medieval prose, is The Adventures of Pryderi is by Llewelyn Wyn Griffith. Kyffin Williams produced a set of illustrations to accompany the text which remained unpublished until he presented them to Gwasg Gregynog in 1997.