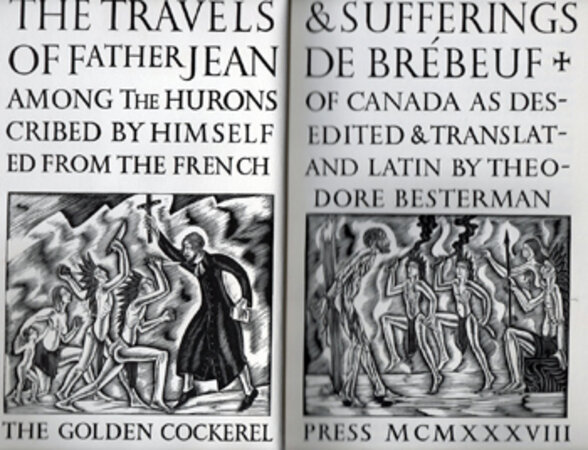 < >
One of Gill’s most spectacular engraved title pages

GILL, Eric. GOLDEN COCKEREL PRESS. ~ The Travels and Sufferings of Father Jean de Brebeuf among the Hurons of Canada as described by himself.

Edited and translated from the French and Latin by Theodore Besterman. 2 wood engravings and engraved title page by Eric Gill. No. 60 of 300 numbered copies. Folio, quarter red cloth, black cloth boards, black morocco and gilt spine label, the endpapers are a map of The Huron country, top edge gilt, others uncut. A very good, crisp copy.

The Jesuit Brebeuf went to Canada from Normandy in 1625 and founded the Huron Missions in Georgian Bay.
As pointed out in the Golden Cockerel Press bibliography Pertelote, this is one of Gill’s most spectacular title pages.