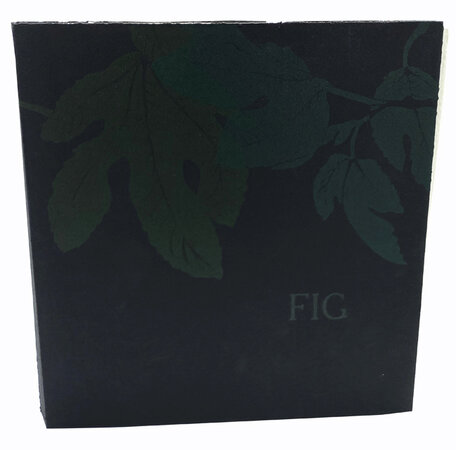 Five round mezzotints of figs in various stages of bursting by Judith Rothchild plus a screen prints of fig leaves including a two-coloured one facing the colophon. Printed on Hahnemuhle paper in Vendome Romain type by Mark Lintott. One of 36 ordinary copies (this no.21). Sq. 4to., loose as issued in velvet black wrappers screen printed with fig leaf, green lettering on spine in the original black slipcase.

D.H. Lawrence's provacative and erotic poem Fig first appeared in Birds, Beasts and Flowers in 1923. It achieved notoriety when it was used in a memorable scene in Ken Russell's film Women in Love . It is stunningly presented here with wonderful use of spacing for the text and luscious illustration. A sensual and and beautiful piece of printing.
Judith Rothchild is an American painter/printmaker who collaboraters with the English printer Mark Lintott on Verdigris publications in the South of France. She has an international reputation and her work has been exhibited at more than thirty solo exhibitions throughout the United States and Europe and is in numerous public collections. She has been represented by Francis Kyle Gallery since 1985.