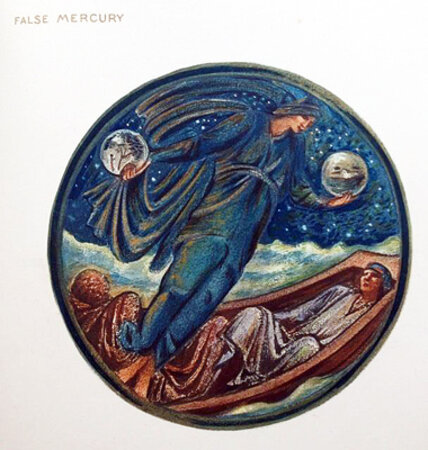 38 stunning colour plates all appearing in a circle of about 15cms in diameter. One of 300 copies (this no.92) with the number in manuscript and the monogram of the Fine Art Society (the publisher) also written in ink. Printed in red and green except for the facsimile list of flowers made by Burne-Jones at the rear which is printed in black. Large 4to., this copy beautifully bound at the time at the WH Smith bindery under Douglas Cockerell in full dark green morocco with gilt lettering on spine and upper cover with gilt borders. A very handsome copy, with some expert repair to the binding and first few leaves.

Georgiana Burne-Jones arranged for this reproduction of Burne-Jones’s exquisite watercolours after his death. He did these images for his wife and for his own pleasure and they were not originally intended to be seen. They were fantasy interpretations of flowers and the subjects which their names suggest. Many of these exquisite images draw on Arthurian and classical legend, in true Pre-Raphaelite style, as well as the Bible. It is thought that because Burne-Jones did these for himself they may contain a fuller expression of himself than exists elsewhere in his work.