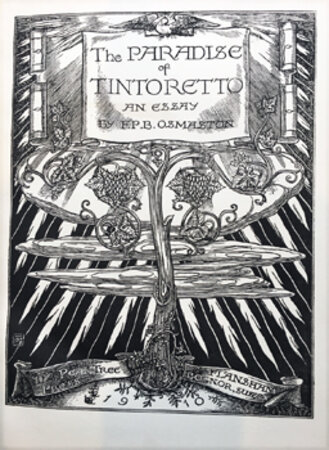 Flansham Printed by Ballantyne & Co for the Pear Tree Press 1910

Elaborate engraved title page by James Guthrie with his monogram in the block. 30 photographic reproductions of Tintoretto’s work. Large 4to., original linen backed blue paper covered boards, designs by Guthrie blocked in gilt on the upper cover and spine.

In the introduction Osmaston thanks his friend “Mr. James Guthrie for the assistance he has given me, both in beautifying the volume and other advice in the matter of publication”.
The Paradise of Tintoretto destined for the Doge’s Palace in Venice was vast, apparently the largest painting ever done on canvas, and some would say it was the pinnacle of Tintoretto’s art.