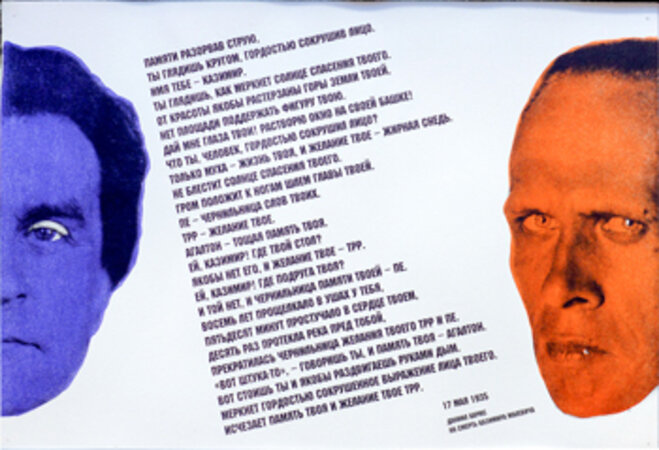 KARASIK, Mikhail. KHARMS, Daniil. MALEVICH. ~ To the Affirmer of the New Art. Daniil Kharms: On the Death of Kazimir Malevich.

One of 21 numbered copies, signed. 16 original colour lithographs by Mikhail Karasik on white Rives paper, all signed, 11 of which contain an image of Malevich’s The Black Square. Folio, 593 x 397 mm, all sheets loose and housed in a black box with a booklet in the form of a Black Square containing a red square in English, which is in turn housed in a box with red cloth sides.

Karasik’s celebration of two of the main inspiring figures in Russian Avant-Garde art, Malevich, and literature, Daniil Kharms. The main focus is on The Black Square as a theme which, like the poem, played a major role in Malevich’s burial cermony. All the lithographs combine Suprematist imagery with contemporary photographs in bold graphic style. Karasik has produced a highly dramatic and visually arresting homage to the Russian Avant Garde.