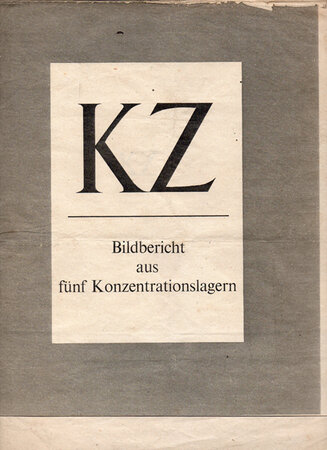 Pp.32 printed on newspaper quality paper. 44 photogravures of images. An untrimmed copy. Some creasing to very edges, a little spotting on the rear wrapper and some trace of a fold down the middle but an incredibly good, untrimmed copy of a very delicate and rare item.

A very important and extremely scarce publication produced shortly after the end of the war to be distributed in Germany by the Americans to show ordinary German people the horrors of the Concentration Camps (KZ being an abbreviation of the German Konzentrationslagern). Problems with distribution meant that it was not as widely seen as was intended and its delicate nature, along with its challenging subject matter, mean that very few survive and it is not known how many were produced.
This coverage of Belsen, Buchenwald, Gardelegen, Nordhausen and Ohrduf is seen as one of most important uses of documentary photography in the 20th century and this book, together with some later photographs, provided important evidence for the Nuremberg trials.