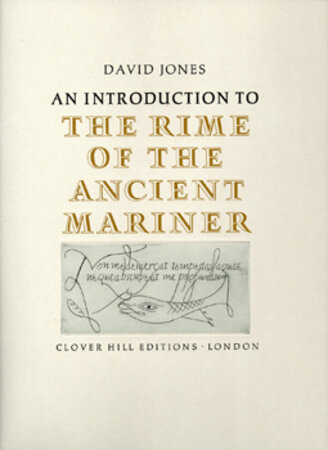 JONES, David. CLOVER HILL EDITIONS. ~ An Introduction to The Rime of the Ancient Mariner.

One of 215 copies, this no. 109. Original copper plate engraving by David Jones on the title page. Designed and printed by Will and Sebastian Carter at the Rampant Lions Press on grey Hodgkinson mould-made paper in Ehrhardt types. Printed on blue paper. 4to., original publisher’s full green cloth, spine lettered in gilt. Small bump on top right corner and slight ruckling to bottom of spine, otherwise a very good copy.

The preface by Douglas Cleverdon tells how David Jones wrote this introduction to The Rime of the Ancient Mariner for the 1964 Clover Hill reprint of his 1929 illustrations for The Rime of the Ancient Mariner, also published by Douglas Cleverdon.
The introduction David Jones produced was a significant 16,000 words and too long for the reprint so Cleverdon decided to publish it separately as the seventh of the Clover Hill Editions.