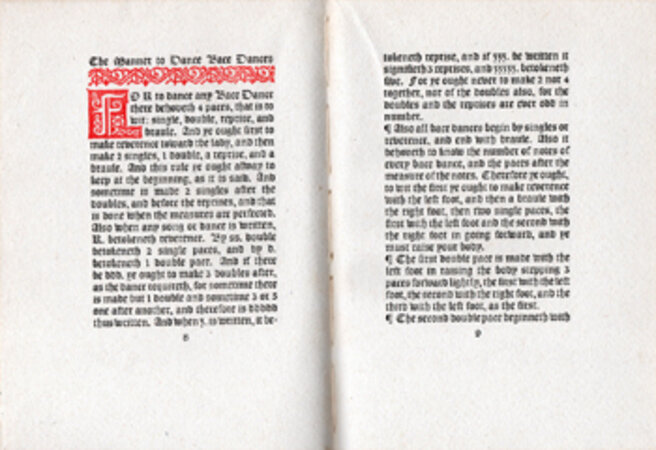 No. 57 of 100 copies.From the Pear Tree Press’s Black Letter Series. Woodcut frontispiece and title page printed in red, woodcut in text. Printed in red and black. Pp. 17. 8vo., original blue cloth with gilt lettering. Darkening to edges of cloth otherwise a very good uncut and unopened copy.
Together with: Letters on Dancing and Ballet by Noverre, translated from the 1803 edition by Cyril Beaumont and printed by him at his Press in 1930. Inscribed by Mabel Dolmetsch to John Guthrie.

Mabel Johnston was Arnold Dolmetsch's third wife (Dolmetsch being the first to revive early music by rebuilding early instruments with the encouragement of William Morris). Mabel herself was a superb dancer and player of the bass viol amongst other instruments, was also very skilled in early and modern languages and translated many original treatises on early dance written in the fifteenth and sixteenth centuries. She published two books on early European dance which are still used by early dance teachers around the world. The Dolmetsch Historical Dance Society is inspired by her contribution to the modern appreciation and understanding of early dance. The inscription of the book translated and published by Cyril Beaumont of the Beaumont Press has a superb provenance being inscribed from Mabel Dolmetsch to the editor and dancer John Guthrie, son of the printer of the book James Guthrie.
The Manner to Dance Bace Dances, printed in 1521 and translated from the French by Coplande, was appended to a French Grammar housed in the Bodleian Library and is the only one on basse dances known to exist in English.