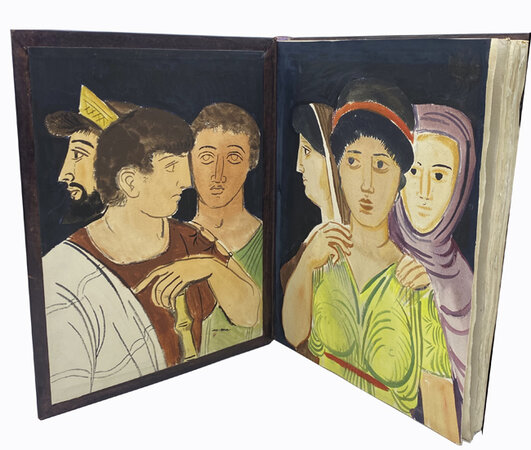 New translation by C. Poyard. 40 etchings by Barta, printed by Edmond Rigal. No. 50 of 59 copies on Montval paper of a total edition of 109 copies. Printed by J & J Vaucher in Garamond type. Folio, bound in a unique binding of full brown calf with two different relief metal plate sculptures on the upper and lower covers depicting a woman carrying water pots, spine lettered in blind and verdigris, the endpapers are each original paintings of scenes from Lysistrata, either by Barta or in his style, top edge gilt, others uncut, in the original, slightly worn slipcase. Rubbing to edges and joints but still an incredible binding. Prospectus inserted loose.