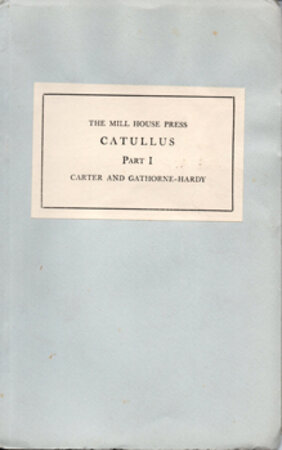 < >
One of around 60 copies - the only parts issued, with the original prospectus

Parts I & II (all issued) of a proposed 6 parts. The prospectus declares that “the edition will consist of not fewer than 60 or more than 100 copies”. Printed by hand in Baskerville type on hand-made paper in red and black. 8vo., original blue wrappers with printed paper labels. In very good condition.

The project was abandoned after these two parts as the subscriptions weren’t numerous enough. The final part was to have the title page, introduction etc so there is no title page.
Apparently the last leaf we have here (p.80) was not bound in to all copies. Of the 10 institutional holdings only Indiana University lists a copy with 80pp, 6 list pagination at 79pp. and 3 have no pagination.
With the original 4pp. prospectus.