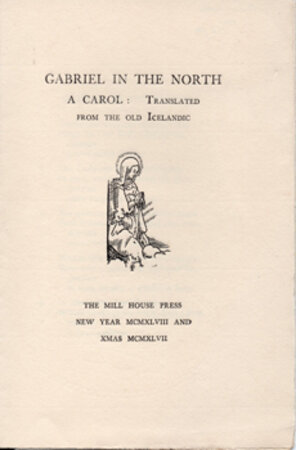 < >
Christmas cards, mostly with an Icelandic root and all inscribed to Michael Sadleir by Robert Gathorne-Hardy

All in stitched paper wrappers four of which are illustrated with woodcuts. All inscribed to Michael Sadleir from ‘Bob G-H’.
The five keepsakes are:
1. ‘Gabriel in the North: A Carol: Translated from the Old Icelandic’. 1947. Pp.4 in English and Latin. Translated from the original Icelandic text in ‘Islenzk Mithaldkvaethi’ published in Copenhagen, 1938. The woodcut on the upper cover is a reproduction of the 16th century Icelandic image.

2. ‘The Holy Night after the Spanish of Fray Ambrosio Montesino’, Christmas 1948. 1 folded leaf. Woodcut borders on front and page 3.

3. ‘A Miracle of Saint Magnus Earl of Orkney’, Christmas 1949, New Year 1950. Pp.4. Translated from the Icelandic Saga of Saint Magnus, from its first edition, edited by Jonas Jonsson, Copenhagen 1780. Rather dark Bewick-like woodcut on upper cover.

4. ‘Song of the Virgin on the Flight into Egypt’, Xmas 1950, New Year 1951. Pp.4. Translated from the Spanish of Fray Ambrosio Montesino. Engraving on upper cover is reproduced from a sixteenth century Icelandic woodcut.

5. ‘The Story of Thithrandi’, Xmas 1952, New Year 1953. Pp.8, partially unopened, errata slip tipped in at rear. Ornamental border round title. A saga taken from the ‘Flateyjarbok’ written in Iceland in the 13th century.