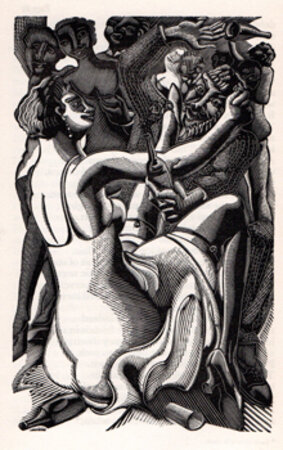 < >
One of only 120 copies - the second, and last, book from the Press and inscribed by Stephen Spender

4 full-page wood engravings by Blair Hughes-Stanton. One of 100 copies for subscribers, (no. 107), there were also 20 copies not for distribution. Printed by Blair Hughes Stanton on Pannekoek mould-made paper at The Gemini Press. 8vo., original brown cloth backed green paper covered boards, gilt lettering on spine and upper cover, fore and lower edges uncut, a very good copy with original tissue guards for illustrations.

With a simple ink inscription on the front pastedown by Stephen Spender: “Best wishes from Stephen Jan ‘55”. I am afraid history doesn’t relate to whom it was inscribed. Booklabel of Furber.
The second, and last, book from The Gemini Press which was set up by Blair Hughes-Stanton and Ida Graves with the backing of Robert Sainsbury. The poet and novelist Ida Graves was the mistress and later the second wife of Blair Hughes-Stanton with whom he had two children. The core idea of the press was to produce books in which the author and artist works in total collaboration. The first book they produced was ‘Epitahlamion’ which was Ida Graves’s poem illustrated with close attention to the text by Hughes-Stanton. ‘Pastoral’ was the second book which was by Ida Graves’s estranged husband Herbert Marks. The press also printed copies of the Gettysbury Address for Robert Sainsbury but it folded as The Depression took hold.