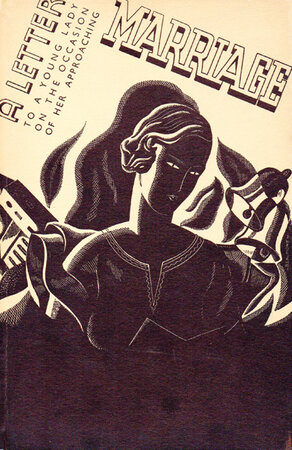 < >
“A pleasantly witty discussion of divorce”

NONESUCH PRESS. HOOPINGTON, Ambrose. ~ A Letter to a Young Lady on her approaching Marriage [and divorce].

One of an unspecified number. Cover design by Leonard Beaumont. Printed at the Kynoch Press for the Nonesuch Press. 8vo., original cream printed boards with wood-engraved image of a young lady, a church and bells on the cover with the title in graphic lettering on the upper cover, edges uncut. Lacking the dust wrapper with the additional words of the title, ‘and divorce’. Spine slightly darkene, mild rubbin to extremities.

Written under the pseudonym of ‘Ambrose Hoopington’ by Cecil Binney, a practising barrister and the founder of ‘Cherwell’ magazine. He also published a popular manual on ‘The Divorce Court’ in 1957.