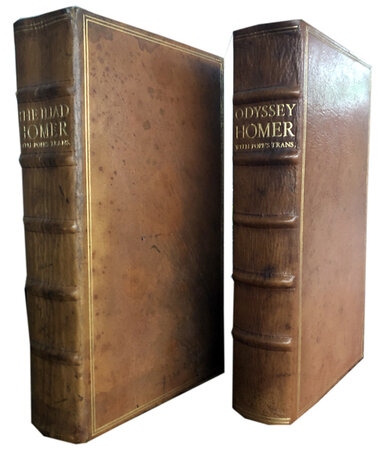 < >
With ownership inscription of Alfonso Ossorio

No. 342 of 1450 copies and 365 of 1300 copies. Ornaments designed, engraved and composed by and under supervision of Rudolf Koch, assisted by Fritz Kredel. Greek and English text printed by Johannes Enschedé en Zonen in the Greek type of J. van Krimpen and Monotype Cochin. Pp. 929; 761. 8vo., original full niger morocco with gilt borders to covers and gilt lettering on the spine, t.e.g, others uncut. Odyssey housed in slightly rubbed original marbled paper covered slipcase, Iliad lacking slipcase. Some marks and rubbing to covers, the Iliad being strongly marked, otherwise good copies.

The Greek text is from the Oxford Classical Texts by Oxford University Press and the English is printed from the first 1715 edition of Pope’s Homer.
Pope’s translations of Homer have been described as a ‘great example of the energy and resource of the English language’.
Odyssey with the book label of William and Margaret Mears and with the interesting ownership inscription of Alfonso Ossorio, Cambridge Mass, 1936. Ossorio was an American abstract expressionist artist originally from the Philippines and educated for a time in the UK and who spent time studying with Eric Gill in Ditchling.