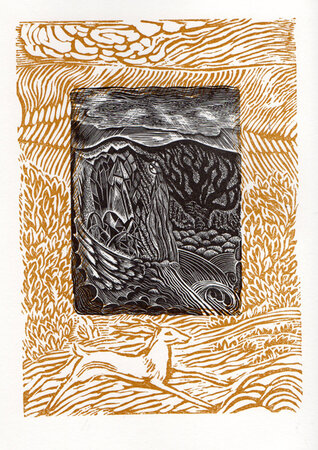 Wood engravings and an afterword by Angela Lemaire. No. 8 of 220 copies, signed by the artist. Set in Van Dijck and printed on Zerkall mould-made paper. Apart from the second colour on the colophon and title pages, three different black inks were used in the printing of the book. Pp. 38 [6]. 4to., bound by The Fine Bindery in original illustrated green paper boards, lettering in gilt to spine, fore and lower edges uncut and housed in the original blue slipcase with 4 wood engravings pasted to one side. A handsome copy, very slightly faded at spine.

Lemaire engraved the blocks in the text especially for an edition of ‘Thomas the Rhymer’ and the engravings, depicting the seasons, that appear throughout the afterword were originally created for a calendar, which was never printed.
Thomas the Rhymer, the thirteenth century visionary poet was inspired by the forests of Melrose Abbey in Roxburghshire where in the poem he sees the Queen of the Fairies and so his journey begins...