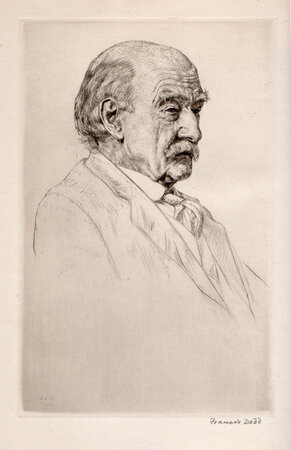 HARDY, Thomas. ~ The Dynasts. An Epic-Drama of the War with Napolean, in Three Parts, Nineteen Acts and One Hundred and Thirty Scenes, the Time Covered by the Action Being about Ten Years.

London printed at the Chiswick Press for Macmillan 1927

Large-paper edition. One of 525 copies, volume one signed by Hardy on the limitation page. Portrait frontispiece of Hardy by Francis Dodd. 3 volumes. Composed in Baskerville type and printed on handmade paper at Chiswick Press. 8vo., [20 x 28 cms], original quarter vellum over gilt-edged Japanese paper covered boards, lettering in gilt to spine, fore and lower edges uncut. A handsome, largely unopened set, without the dust jackets, slightly dusty with a tiny bit of wear to the paper on volume I and rubbing to top of spine of volume II.

The work Hardy considered his masterpiece, and to which he devoted much of his later life completing.