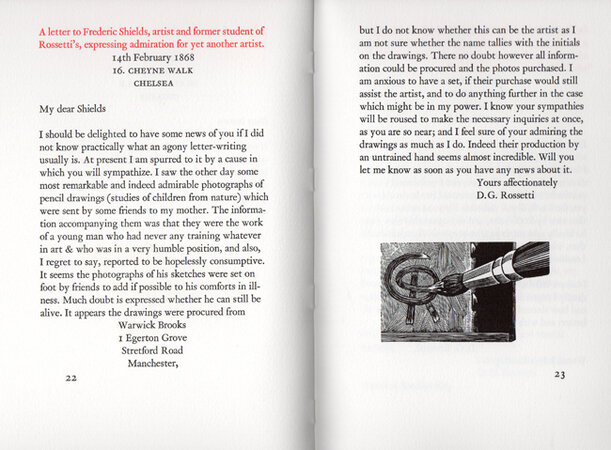 < >
Letters by Dante and William Rossetti

Wood engravings by Linda Holmes. No. 62 of 145 copies. Designed and printed by Juanita Bishop and Barnard Taylor. Handset in Van Dijck type and printed on Somerset paper. Edited by Mary Chenoweth Strattion, with an introduction by Alicia Craig Faxon. Pp. 45 [3]. 8vo., bound by Don Rash and Nicolyn Rosen in cloth and marbled paper boards, lettering in silver to spine, fore edge uncut. A fine copy.

A selection of previously unpublished letters by Dante and William Rossetti written during the latter stages of the Pre-Raphaelite movement and then, in the case of William, 30 years later. The letters are in the Lafayette Butler collection at Bucknell University.