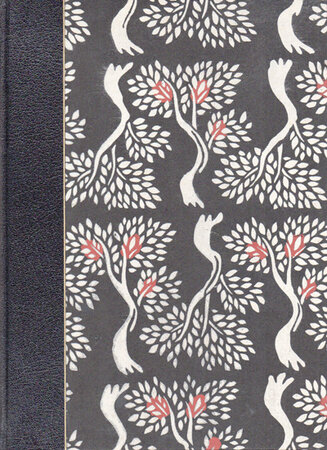 Translated into English by A Benedictine of Stanbrook with a preface by Robert Speaight. Title devices by Margaret Adams, first two poems with initial letters in green, occasional headlines, opening poem and title printed in reddish-brown. Text in French and English. Handset in van Krimpen’s Romanee type on Barcham Green handmade paper. One of 500 copies, this no. 274. 4to., [19.5 x 27 cms], bound by George Percival in original quarter black morocco over Japanese patterned paper covered boards, with green Japanese endpapers and the original slipcase covered in reddish-brown Japanese paper, a very good copy.

A beautifully presented collection of Maritain’s poems. Raissa Maritain, originally from Russia, moved to Paris as a child, married the philosopher Jacques Maritain and eventually converted from Judaism to Catholicism after much deep philosophical thought. She is best described as a philosopher, poet and mystic. A friend of Marc Chagall, she once described his work as having a “tender spiritual joy... penetrated with melancholy”. This could well describe her own remarkable poetry which is translated here from the French by one of the nuns of Stanbrook.