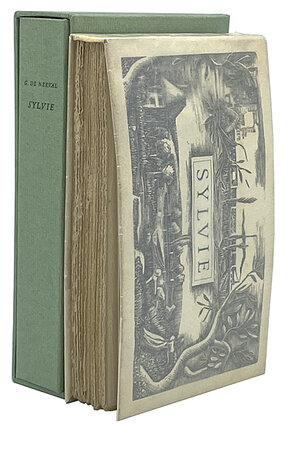 2 wood engravings by M. Melsonn (Madeleine Suzanne Meillet). One of 1000 copies, this no. 479, there were also 30 special copies. Preface by D’Aristide Marie. Text in French. Pp. xlix [1] 107. Oblong 32mo., original limp vellum with Melsonn’s engravings to upper cover and frontispiece, in the original glassine wrapper. Housed in a pale green folding portfolio inside a matching paper covered slipcase. A few faint spots to endpapers, along edges and to rear cover, otherwise a lovely example.

‘Sylvie’ – the story of a hero who falls in love with three women, all of whom he loses – was first published in 1853 in the periodical ‘La Revue des Deux Mondes’ and later in Nerval’s final collection of prose works, Les Filles du Feu, which was published shortly before he committed suicide in 1855.