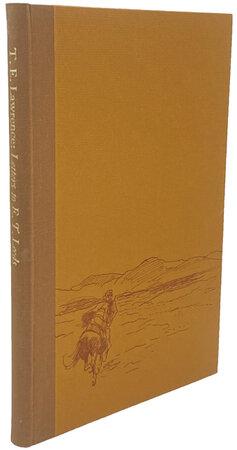 Illustrated with 10 line drawings by Richard Kennedy and 24 half-tones of photographs, facsimile letters, drawings and documents. Tipped-in frontispiece photographic portrait. One of 650 copies, this no. 255, of a total edition of 750 copies. Edited and with an introduction by J.M. Wilson. Memoir of E.T. Leeds by D.B. Harden. Set in monotype Caslon and printed on Zerkall mould-made paper. Pp. xxii [2] 140. 4to., bound by the Fine Bindery in original quarter brown buckram over ochre illustrated boards, lettering in gilt to spine, housed in original ochre cloth and brown paper slipcase. Very slight rubbing to slipcase, otherwise a fine copy.

A fascinating collection of 53 previously unpublished letters written by T.E. Lawrence to fellow archaeologist and close friend Edward Thurlow Leeds between 1909 and 1935, most of them composed during Lawrence’s archaeological excavations at Carchemish. Leeds was Keeper of the Ashmoleam Museum from 1928-1945.