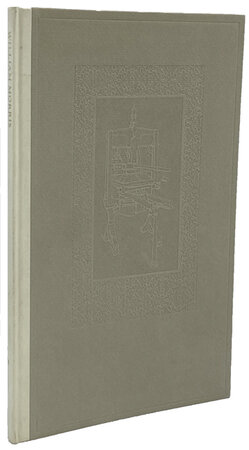 PRESS OF THE WOOLLY WHALE. MORRIS, William. ~ Some Thoughts on the Ornamented Mss. of the Middle Ages.

A memorial volume, printed to commemorate the one-hundredth anniversary of the birth of William Morris. The first book to be hand printed on Morris’s Kelmscott ‘Chaucer’ press by the Press of the Woolly Whale. One of ‘a modest number’, there were also 4 copies printed on vellum. Handset in the original English Caslon Old Face type and printed damp on Arnold Unbleached paper by George W. Van Vechten, Jr. Pp. 20. 8vo., original quarter vellum over brown paper covered boards, image of a printing press enclosed within a decorative border blind embossed to upper cover, lettering in gilt to spine, t.e.g, others uncut. A very good copy.

Originally printed by Morris on his Albion Press, with an account of its travels following the closure of the Kelmscott Press in 1898 written by Melbert Cary who acquired it from the Aries Press in 1932, who in turn had got it from Frederic Goudy who had bought it from James Guthrie of the Pear Tree Press in the UK.