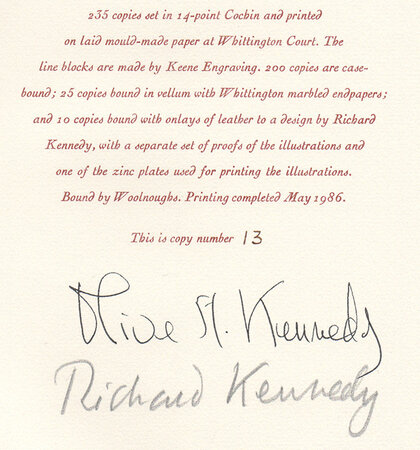 10 line drawings by Richard Kennedy. One of 200 copies, this no. 13, signed by the translator and artist (there were also 35 special copies). Translated from the French and with an introduction discussing the origins of letters by Olive Kennedy. Set in Cochin type and printed on laid mould-made paper at Whittington Court. Pp. 36. 4to., bound by Woolnoughs in original pink illustrated paper covered boards, lettering printed in black to spine, top edge pink. Housed in the original, slightly rubbed black paper slipcase. A handsome copy.

The letters between Portuguese nun Mariana Alcaforada and French officer Noel Bourton, Comte de Chamilly, who served as a colonel in the campaign of 1663-1668 when the French drove out the Spanish and liberated Portugal.