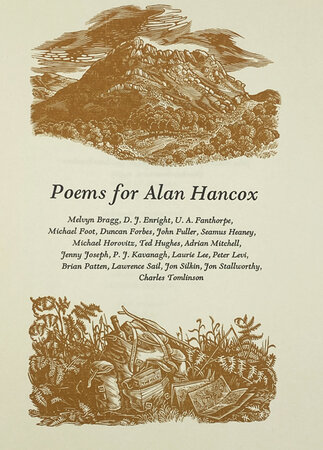 < >
One of only 50 special copies, signed by all the contributors, including Melvyn Bragg, Seamus Heaney and Laurie Lee, with separate proofs of the title page wood engravings.

Title page wood engravings by Miriam Macgregor. One of only 50 special copies, this no. XLI, signed by all the contributors, and with separate proofs of the title page engravings by Miriam Macgregor, each signed by her on pencil and housed in the rear pocket. There were also 300 regular copies. Introduction by Melvyn Bragg. Assembled by Alan Tucker. Set in Goudy Modern type and printed on Zerkall mould-made paper. Pp. [48]. 4to., original quarter burgundy Oasis morocco over patterned paper covered boards, lettering in gilt to spine, housed in the original brown cloth-edged paper covered slipcase. A lovely copy.