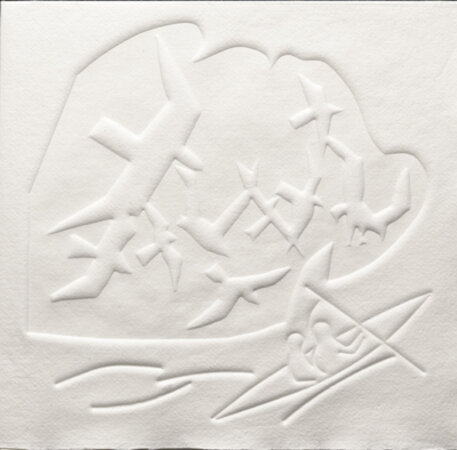 < >
The story of Sedna, the Inuit Sea Goddess, with some of King’s greatest blind relief prints

An Inuit Myth with verse by Richard Price. One of only 40 signed and numbered copies. 7 french-fold gatherings with 15 blind relief prints (5 double page) from wire and shaped board sculpture on Khadi paper by Ron King. Letterpress text printed in a delicate icy blue. 30 x 31.5 cms, with the sections in thick Khadi paper wrappers with Inuit image by King on the upper side, all housed in a hand made card blue chemise with image by King blocked in silver on the upper board and sliver lettering to the spine, in a canvas covered slipcase.

A true masterpiece and breathtakingly beautiful. The poet Richard Price and the artist Ron King retell in words and relief prints, “the Inuit story of the motherless young woman Sedna who becomes, through extreme trial, the sea goddess central to Inuit belief. In this version, Sedna first appears when she is refusing to have local suitors foisted upon her by her father. She resists any match until a mysterious stranger approaches. Beguiled and seduced, she is finally persuaded by this charismatic figure to take him as her husband. It is not long before she realises, too late, just how, or what her lover actually is....The unfolding story sets dark violence against redeeming wonder, re-expressing this haunting creation myth in word and image”.
Ron King first encountered the myth in Canada over 50 years ago and his reponse to it is powerfully understated. The book is almost entirely white in homage to the Inuit landscape of snow and ice, using blind embossing to make shadows of the images and Inuktitut lettering. With the ice blue letterpress of Price’s poems, an atmosphere of soft yet austere definition has been created which enhances both the violent and the sensual dream-like qualities of the story.