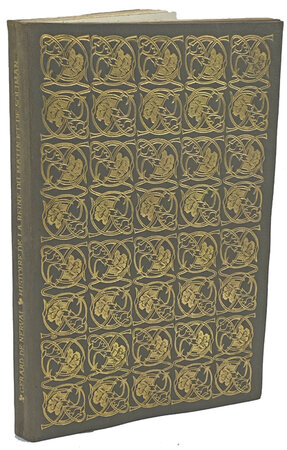 < >
A remarkably good copy, printed for Paul Blondeau of the Cent Bibliophiles

Wood engraved title page with gild and first page illustration and border in five colours, 14 wood engraved illustrations in grey/green, 12 historiated initials in gold and colour, 3 tailpieces and on headpiece in grey/green designed by Lucien Pissarro and engraved by Lucien and Esther Pissarro. One of 130 copies printed for Les Cent Bibliophiles, this No. 14 for Paul Blondeau. Printed in Brook type on special Arches paper with watermarks of Les Cent Bibliophiles and Eragny. 8vo., in the original full limp olive green morocco with elaborate pattern of carnations in gilt on both sides, the usual even browning to the free endpapers and edges and some slight widening of the gaps bewteen a couple of gatherings as often. An unusally strong, extremely good, bright copy, in a really good example of the original binding, housed in the original card slipcase.

The result of a serious commission from the Société des Cent Bibliophiles for an edition of Nerval's Eastern tale for which they paid 10,000 francs (£400). Lucien developed a method of combining colour and gold leaf in printing initial letters which proved problematic at first but which was staggeringly beautiful once he had conquered it for this book.