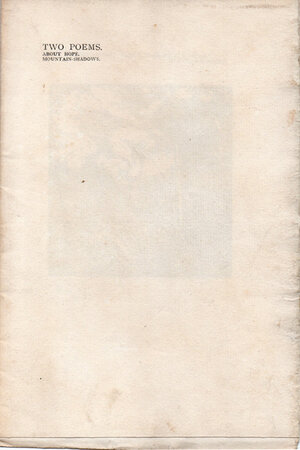 Sturge Moore’s first book printed in a very small edition for family and friends and dedicated to his father and mother. After his first properly published book, The Vinedresser, appeared in 1899 he came to the notice of many in the wider literary world including WB Yeats who became a lifelong friend and who used him to provide dramatic cover designs for 6 of his books including The Tower.
Sturge Moore had been taught by a young Charles Shannon at Croydon School of Art where he was a contemporary of Arthur Rackham and then he was taught wood engraving by Charles Ricketts from 1887 at Lambeth School of Art. He later rented a workroom at Shannon and Ricketts’ house at the Vale and by the time this book appeared he had encountered a large part of London’s literary and artistic scene including Wilde, Shaw and Beerbohm.