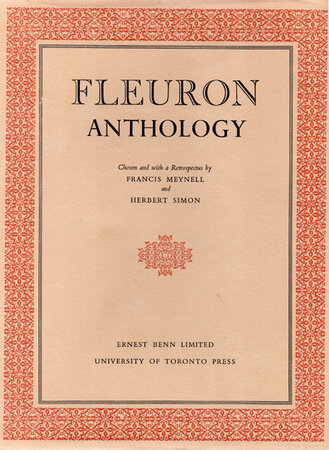 First edition. Pp. xvi, 360. Numerous illustrations, several coloured or tinted, some in red and black. 4to, original dark blue cloth, spine lettered in silver, in the original dust jacket (few chips and tears with some marks to rear of jacket). Generally good.

A selection from the seven volumes of The Fleuron published between 1923 and 1930, including Newdigate on The Ashendene Press and Emery Walker, Updike on The Planning of Printing, Initial Letters by Percy Smith, Holbrook Jackson on Claud Lovat Fraser, Dwiggins on Updike and the Merrymount Press, Rodenberg and Anna Simon on Klingspor, Windisch on Rudolf Koch and Paul Beaujon (Beatrice Warde) on Eric Gill.